On the surface of it, all reward charts should be the same right? The kid behaves well/does this/does that/performs well/achieves/completes chores etc, etc, an acknowledgment is placed on the chart (stickers, ticks, colored-in spot etc), the kid feels good about this and is more likely to complete or engage in the same behaviors again. Of course this is a very simplified flow of what happens but the essence of it is more or less accurate…

Reward charts are a brilliant strategy to achieve a positive outcome in relation to shaping a child’s behavior, and of course I’m a huge advocate on using them (I sell reward chart packages, so of course I love them!) There are however some challenges in successfully implementing reward charts over a sustained period of time… Why?

Fundamentally there are only two reasons why reward charts lose their effectiveness and their “successfulness.” Either parents or carers lose interest in overseeing the implementation of the reward plan, or the child loses “engagement” with the chart. Both of these elements can render an otherwise great reward plan useless.

Unfortunately, as a company selling reward chart packages, there’s not much we can do about parents falling off the reward plan bandwagon (and parents needn’t beat themselves up over this, re-engagement can happen with only very incremental changes in thinking). However we do have some level of control over the issue of children staying engaged in the reward chart by way of strategically designing the flow of the reward chart. There’s several elements to this that deserve exploring.

Firstly it’s important to recognize those elements of any reward chart that are innately rewarding for kids. These are the elements of the chart where a child experiences gain or feels rewarded for following “the rules” of the reward chart. For example gaining a sticker to place on the chart. These small steps also lead to another level of motivation for the child, which is the visual representation of their chart progression. Simply, they can see that they are getting closer to their reward.

We have specifically designed our charts to take real advantage of this visual representation of progress. More than that however, is that we have utilized what we like to call “milestone spots” on the chart, whereby a child experiences smaller rewards as they progress toward the ultimate reward of the chart. We have designated these milestone spots to be a Bronze spot, a Silver spot, and a Gold spot. 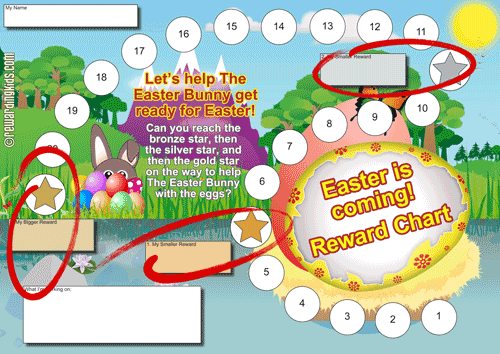 While the aim of using these milestone spots is to keep children engaged and “on-board” with using the reward chart, it is a fantastic way to give your child a taste of success without overwhelming them with the all-encompassing aspect of the chart, i.e. “you complete this reward chart in its entirety, you receive a reward.”

Generally speaking, we believe that all reward plans should have some “milestone” spots (or moments) built into it. It allows parents to give their children a taste of success while still requiring completion of the plan (the reward charts in our case), it allows children to quickly become engaged and stay engaged, and it gives the reward plan a greater chance of success, over a short-term and longer-term time span.